Many people know that I have had Crohns disease since I was 22 years old  – that was when it was officially diagnosed but probably from 4 years before when I was 18 years old. It has had an immense effect on my life firstly medically – I have had 3 bowel resections and been on medications since the last one in 2002 which very nearly killed me. The only times when I was really fit in and well were when I was pregnant and breastfeeding which sparked my interest in becoming a breastfeeding counsellor 31 years ago. It meant I fed my second and third daughters for much longer (I became very ill soon after I weaned my first) and became passionate about supporting women to breastfeed. As a pharmacist that rolled into an interest and then passion about drugs in breastmilk.

When I regularly had contact with mums with IBD asking about their medication I decided to set up the Facebook group as a mutual support group. Mums who understood the urgency of toilet visits when out shopping, understood how debilitating it was to be in constant pain, that we could discuss anything in a private forum with others in the same situation. Coincidentally it has become a place where people ask each other about drugs and look to me to provide evidence of safety in breastfeeding – that wasn’t the original intent but an excellent spin off.

I havent set up any other specialist interest groups – this is out of my personal interest. Unsurprisingly the diagnosis and treatment of inflammatory bowel disease has taken up a lot of space in my book Breastfeeding and Medication and I am keen that professionals understand that breastfeeding protects our babies but is also something which we value above many things.

As of this morning we have 556 members from all over the world, climbing steeply recently.

Specialists seem to be very concerned about the safety of the drugs – which are strong admittedly and breastfeeding. But we also need to bear in mind that IBD is at least partly linked with being formula fed so we want to maintain breastfeeding and use specialist sources.

Live vaccines may be delayed or omitted – particularly the rotavirus vacc. However, this is as much to protect the mother who may contract the illness from the viral particles shed through the faeces, Exclusively breastfed babies are at low risk if contracting rotavirus in any case.

CONCLUSIONS: In a study of women receiving treatment for IBD and their infants, we detected low concentrations of infliximab, adalimumab, certolizumab, natalizumab, and ustekinumab in breast milk samples. We found breastfed infants of mothers on biologics, immunomodulators, or combination therapies to have similar risks of infection and rates of milestone achievement compared with non-breastfed infants or infants unexposed to these drugs. Maternal use of biologic therapy appears compatible with breastfeeding. 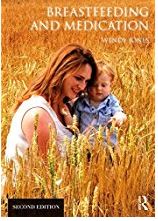 On my mission again today to write information on the frequently asked questions by mothers and professionals. Neuropathic pain affects many mothers with chronic conditions and the data is not easy to find. I hope this information, much taken from my book, is useful.

Terminations of pregnancy and Breastfeeding

I have had 6 mothers contact me in the past 72 hours asking about continuing to breastfeed an older child after a termination. It is hard enough to have to make the decision to terminate without having to lose the current breastfeeding experience. So here, without judgement, is the information that mothers, their family and professionals may need to protect that relationship.

This is data taken from my book. Why not buy a copy! £30.73 on Amazon today and worth every penny

Opiates and the breastfeeding mother

I’m not sure how many ways I can provide this information. Multiple times EVERY day I hear of breastfeeding mothers being sent away with prescriptions and told to stop breastfeeding or are told they cant have strong pain killers if they are breastfeeding – so it is their choice! NHS why cant you understand that there are opiate options for breastfeeding mothers. Opiates should not be used as freely as they are or put onto repeats prescriptions without fully informing the patient that they are addictive. But sometimes we all do need help short term.

Opiates and the breastfeeding mother

If you are finding these fact sheets useful maybe you would find buying my book a valuable investment! £30.73 on Amazon today !

Breastfeeding and pain relief for acute back injury

So many mums seem to injure their backs – maybe we need antenatal classes on how to lift your baby (and equipment!) or more assessment of post-natal damage. When pain has not resolved with simple painkillers (paracetamol and ibuprofen (taken regularly and at full dose) sometimes further treatment is necessary from professionals. This may help the mother access physiotherapy or other mobility treatment.

Information here on how to treat the pain of acute back injury and relieve the spasm. I hope that it aids mothers and professionals.

Breastfeeding and pain relief for acute back injury

Using cocaine when breastfeeding is obviously not a good idea, apart from being illegal. But from messages I get almost every week it seems not uncommon. Everyone says that they are embarrassed and regretful and promise not to do again but need to know how to maintain milk supply and keep baby safe. In my quest to provide information to frequently asked questions this is detailed research on cocaine and the breastfeeding mother taken from an article I wrote for The Practising Midwife (Jones W Cocaine use and the breastfeeding mother. Pract Midwife. 2015 Jan;18(1):19-22.) as well as my book Breastfeeding and Medication

Breastfeeding and Cocaine use

Cocaine use and the Breastfeeding Mother (PubMed)

another of the frequently asked questions

Treating coughs. colds and sore throat in the breastfeeding mum

Every year there are many questions on coughs, colds and sore throat so thought I would pre-empt them this year by recording a live video as well as the links and fact sheets

Hope everyone has a healthy winter !

Treating coughs colds and sore throats in the breastfeeding mother

cough and cold remedies and breastfeeding 2018

Treating coughs, colds and sore throats in the breastfeeding mother

Posted by Breastfeeding and Medication on Thursday, September 13, 2018

Postpartum cardiomyopathy (PPCM) is a rare condition that develops near the end of pregnancy or in the months after giving birth, manifesting as heart failure secondary to left ventricular systolic dysfunction. Clinical progression varies considerably, with both end-stage heart failure occurring within days and spontaneous recovery seen. Treatment pathways for heart failure are well established, but the evidence about the safety of medicines passed to infants during breastfeeding is scarce and mainly poor; this often leads to an incorrect decision that a mother should not breastfeed. Given its benefits to both mother and infant, breastfeeding should not routinely be ruled out if the mother is taking heart failure medication but the consequences for the infant need to be considered. An informed risk assessment to minimise potential harm to the infant can be carried out using the evidence that is available along with a consideration of drug properties, adverse effects, paediatric use and pharmacokinetics. In most cases, risks can be managed and infants can be monitored for potential problems. Breastfeeding can be encouraged in women with cardiac dysfunction with PPCM although treatment for the mother takes priority with breastfeeding compatibility being the secondary consideration. International research is continuing to establish efficacy and safety of pharmacotherapy in PPCM.