Sadly recently I have heard from several mothers who have been diagnosed with an ectopic pregnancy. They have variously been told that they cant breastfeed again for 2 months and 3 months. One distraught mother planned to pump and dump her milk for 3 months with the hope that she could return to breastfeeding later.

We should be using evidence based information sources as NICE PH11 recommended originally back in 2008. NICE Guidelines – prescribing 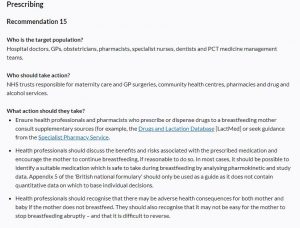 So here is the information based on research. A mother administered methotrexate 50 mg/m2 IM for ectopic pregnancy can breastfeed as normal after 24 hours, In the meantime she should pump and dump to maintain her supply. She should not attempt to conceive for 3 months.

Sadly dreams dont always come true and babies are lost during pregnancy. If that happens and you are still breastfeeding a toddler do you have to stop? Lots of information here I wrote for www.essentialparent.com. Extracts taken from Why Mothers Medication Matters

It seems that many more women with chronic illnesses are having babies and breastfeeding. I have

included a chapter in the second edition of Breastfeeding and Medication on this. This fact sheet on lupus and hydroxychloroquine whilst breastfeeding is taken from the book, due to be published May 2018

Lupus and hydroxychloroquine and bf

One of the advantages of breastfeeding is that for many it may be months or even years before menstrual bleeding returns regularly. However, some mothers do experience heavy flow which needs to be treated. Tranexamic acid is usually the drug of choice at a dose of 1 g 3 times a day for up to 4 days, to be initiated when menstruation has started; maximum 4 g per day (BNF 2018). Mothers can continue to breastfeed as normal. There is one reported case of restless in the baby in a study of 21 mothers but in general it seems anecdotally, to cause few problems.

I am frequently asked about taking prochlorperazine (Buccastem® or Stemetil ®) to treat nausea due to labarynthitis, vertigo or dizziness. It is a drug I would be happy to prescribe and have used it myself as have my two breastfeeding daughters. It seems a frequently asked question when the air pressure changes rapidly. Prochlorperaszine may also be used for nausea